What is a buffer?

Here’s an example of what a buffer might look like if you console.log it in the terminal.

You can see that a buffer has an object type of Buffer. Then you see some numbers grouped in pairs. Because there are 8 pairs, you know that this buffer has a size of 8. What do these numbers represent?

Well, since a buffer is a container for bytes, you might have guessed that these numbers are bytes. But if a byte is a group of 8 bits, how can two numbers represent a byte? Shouldn’t it be 8 numbers? And why do some of the numbers have letters?

The short answer is that in order to save space and be more readable, the implementers of node.js have chosen to display a hexadecimal numbers instead of a binary numbers. What does that mean? 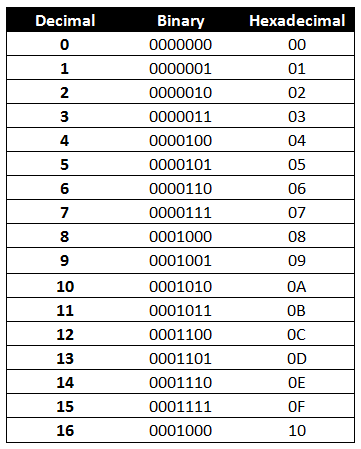 It just so happens that any 8 digit binary number can be represented by a 2 digit hexadecimal number. That’s why we see two digit for each byte in the buffer.

There’s one last thing we need to understand about buffers and bytes before looking at how to use them — encoding. Just looking at a bunch of bytes you can’t actually tell what those bytes are meant to represent; you also have to know the encoding. For example, let’s say we have this buffer:

If we want to read those bytes as a string, we need to know what characters those bytes map to. That mapping is the encoding. Different encodings will translate to different strings. Here you can see the output of reading the buffer above as a string using the ‘utf16le’ and ‘utf8’ encodings.

Encodings work in “both directions”. That is, you can convert from a buffer to a string and from a string to a buffer. We already saw that converting to a string can be done with the toString method. To get a buffer from a string you can use the Buffer.from method like this:

In both cases the default encoding is ‘utf8’ so you don’t have to pass an encoding, but I think it’s better to be explicit.

You might be surprised to hear that numbers have an encoding too. But with numbers the encoding is determined by 3 different properties: the bit-length of the number, the type of number, whether or not its signed, and whether it is big- or small-endian.

Conceptually buffers are quite similar to arrays. They use bracket indexing and assignment just like arrays, and they have a length property as well as a concat and a slice method that works in basically the same way as arrays. However unlike javascript arrays, javascript buffers have a fixed length.

You can find the official documentation here.

There are lot of ways to create a buffer but the simplest is probably just using the alloc method. If you know you’re going to fill up the buffer immediately then you can use allocUnsafe which is more efficient but doesn’t clear out random unused bytes from the buffer.

Or you can use the from method, where you’ll most commonly be passing in an array of numbers, a string, or another buffer. If you pass a string, you’ll want to also pass an encoding (or use the default ‘utf8’).

Note that new Buffer is considered deprecated, so you’ll want to use the alloc, allocUnsafe, or from methods instead.

If you want to read or write a string to a buffer, then you can use the toString or from methods respectively. Remember you should specify the encoding or you will use utf-8 by default. I prefer to pass the encoding explicitly even if I’m using utf-8.

If you want to read a number out of the buffer, there is a set of built in methods that specify what bitlength, encoding, and endianness you’re dealing with. The method names follow the following convention:

The above methods will cover almost everything you want to do with buffers, but there are some other methods that are occasionally useful. I find copy especially useful when you already have a buffer and you want to write its content into another buffer. For example: